*** WARNING ***
Sorry! This is long! I should have probably broke it into pieces, oops!

Holy crap, I’ve been super busy. Since my last update in February I did race in the Stanford Treeathlon, Jenny’s Light 10k, Green St. Patrick’s half marathon, US Half Marathon Part 2, Tierra Bella Century, Big Bunny Fun Run and The Relay. I’ve been really busy training, eating and sleeping as much as possible while Ironman Texas lingers right around the corner. I don’t think I’m even half as well prepared as I should be by now, but I can’t complain.

Here’s a quick rundown of things that went on:

Stanford Treeathlon:
The weather for the Treeathlon was very cold for the bay area and the water temperature I believe was into the 50’s. They unfortunately had to cancel the swim portion because of hypothermia fears while out on the bike course. They turned it into a duathlon format instead by replacing the swim with a run. Of course I’m not a very strong runner (not that I’m a strong swimmer, but hey!) I was a little bummed but it’s a completely understandable decision by the race directors. Proud to say I finished pretty mid-pack… which makes me very happy! Progress! Cycling was pretty fast and the running a bit slower… as usual! 🙂 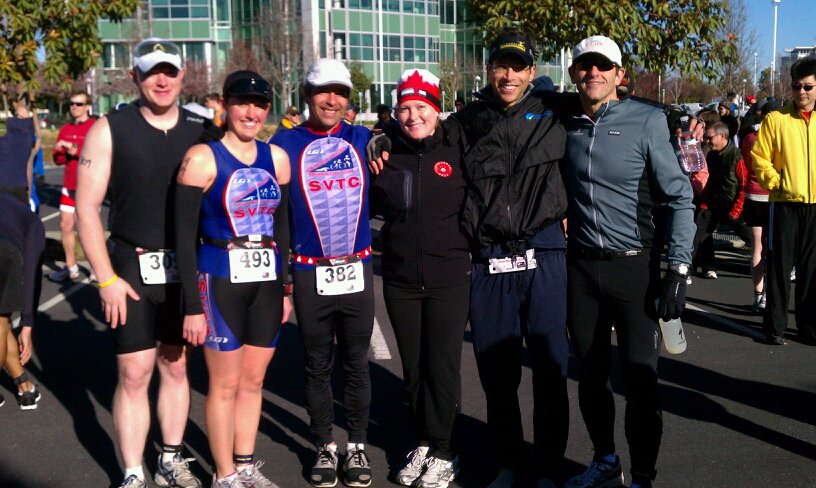 Jenny’s Light:
The Jenny’s Light 10k was pretty fun. I didn’t do too well but I don’t even remember what lame excuse I had! Haha. It was at Vasona Park in Los Gatos and for a very good cause. Unfortunately I don’t think I have any photos from the event which stinks, especially since Kelly won a prize for wearing a running skirt! I promise if I find photos I’ll get them on here.

Go Green:
The weekend after the Jenny’s Light run we went back to Vasona Park to run the Go Green St. Patrick’s Day Half Marathon. It was a lot of the same course as the previous week, except, well, twice as big. Good scenery and good people, but it was very crowded. There was also quite a lot of problems going on such as signage and volunteer shortages. I think the race might have grown a little too big for it’s belt already but hopefully they straighten it out for next year. I did ok but blew up a bit during the last few miles of the race. 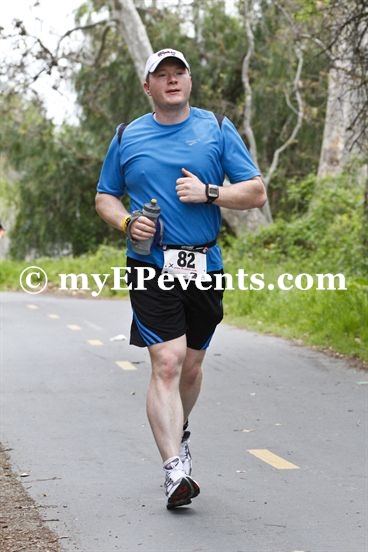 Yes, I was trying to give a thumbs up on purpose!

US Half Part 2:
A month later we headed up to San Francisco to do the 2nd half of the “US Half Marathon” series. It was the same course as the first half, but it crosses the Golden Gate Bridge and through some nice areas of San Francisco so I can’t complain. It’s a full marathon with a 4 month break in-between! 😉 There was a big lack of porta potties, but I found one about 100 yards past the starting line. (After the race started!) I stopped my garmin and I’m using THAT time as my official time, because hey, who the hell puts porta potties on the other side of the starting line? Anyway, I was trying to keep my heart rate fairly low for this and was really happy being really close to breaking two hours. I know I can definitely do it now if I go out harder and have a less demanding course. The Golden Gate Bridge does subtract 1 minute from your pace though… always pumps me up. 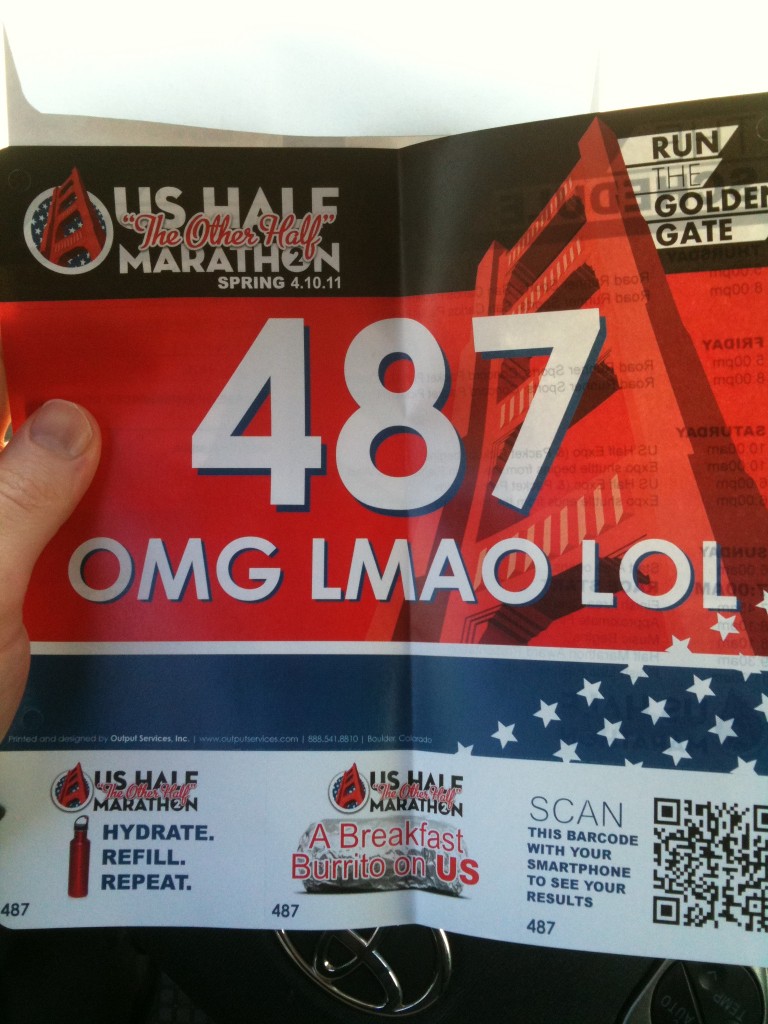 This is why you don't give me the option to make our own personalized bib! 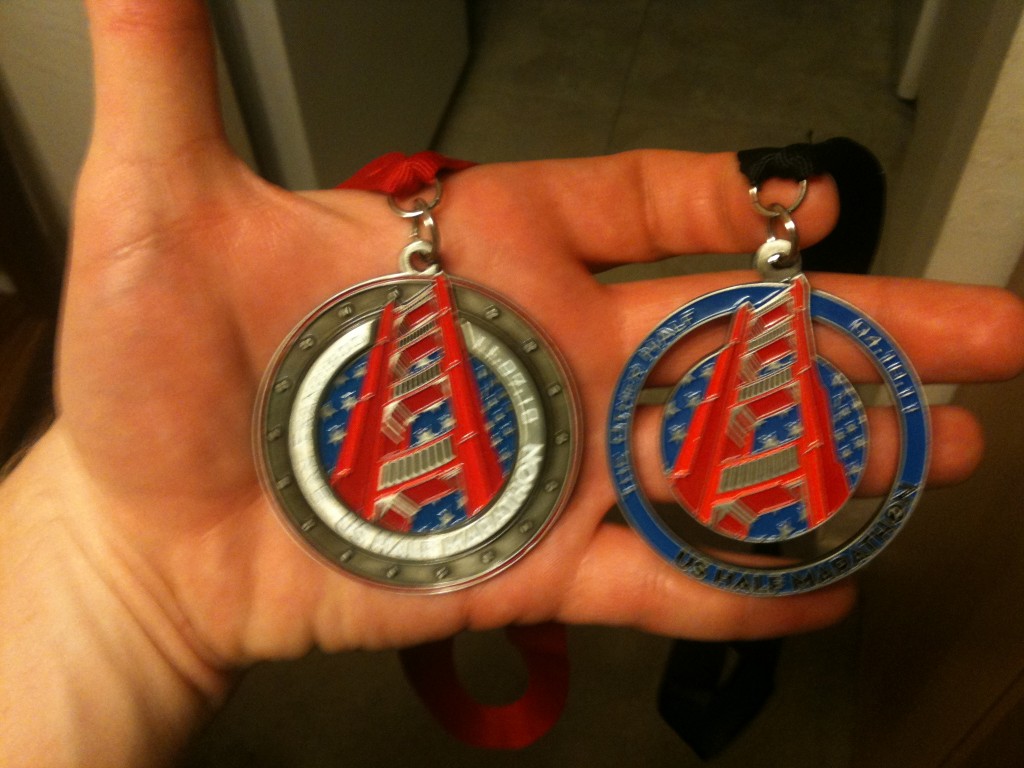 Left medal is from the 1st half, right one is the 2nd half 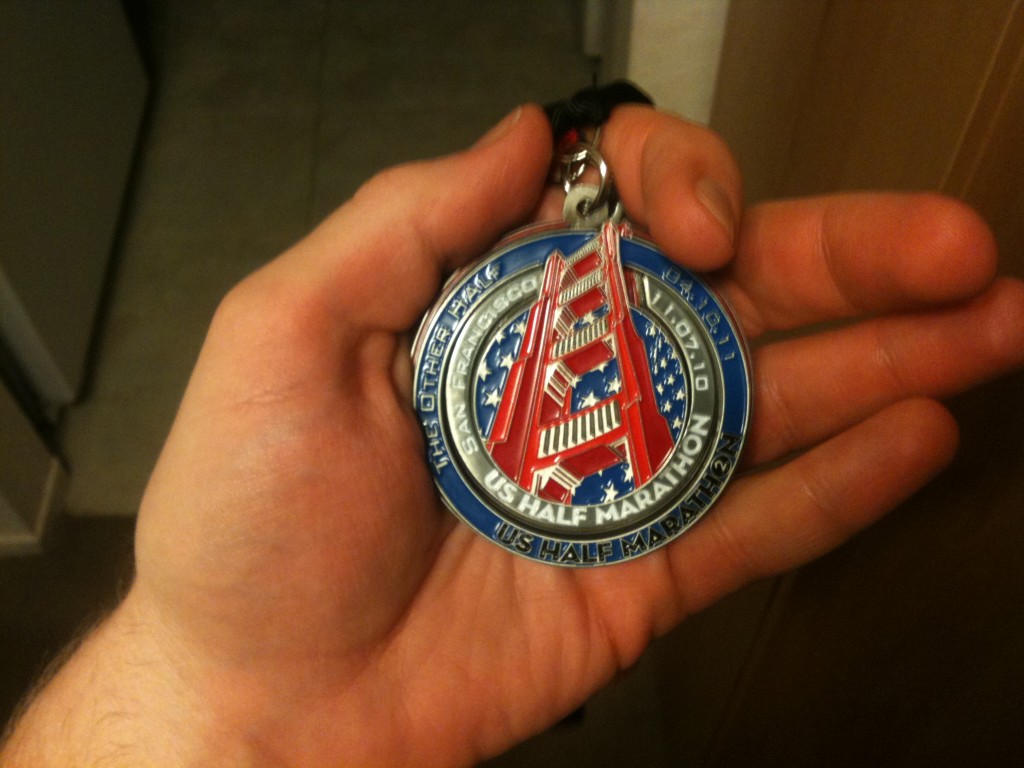 Tierra Bella:
Because I’m a huge fan of suffering, we headed down to Gilroy to ride the Tierra Bella century. It was a nice 102 mile route with about
6700 feet of climbing on my altimiter. The Henry Coe climb was pretty difficult but rewarding. I believe it was around 2700 feet over the course of about 8 miles. I wanted to have a full recap with photos on the ride but alas, I forgot to even bring my camera with me for the ride. I’d like to go down and ride a bunch of the route again and get some shots. It was gorgeous. A volunteer took a good shot of Kelly and I at the rest stop around the 75th mile. 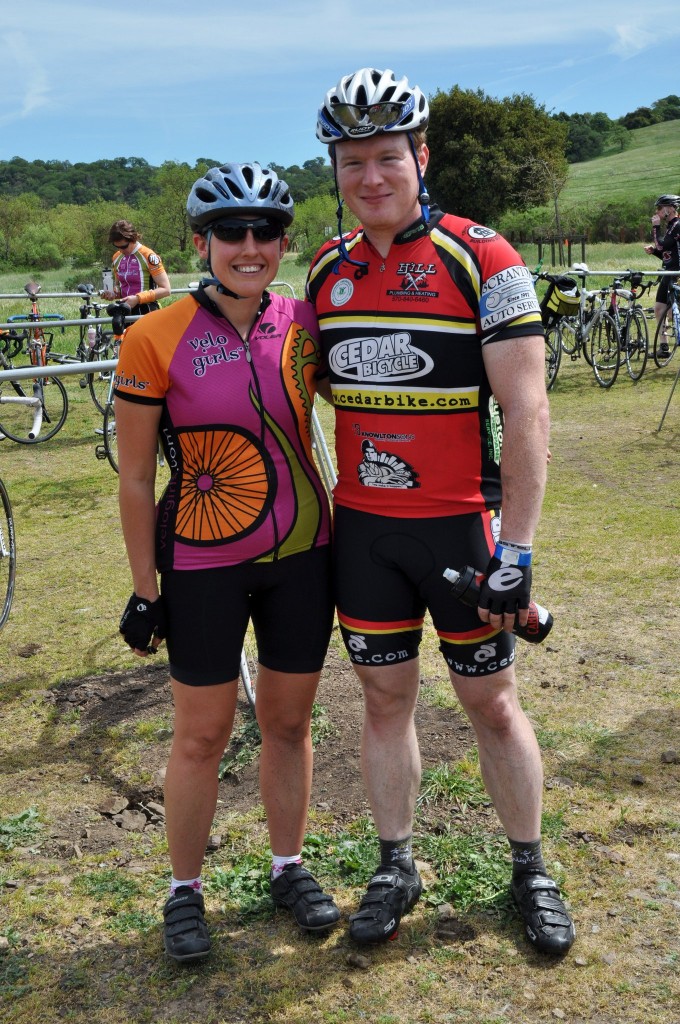 Can you spot the hidden oreo?

Big Bunny Fun Run 5k
I love this race. A nice little trot around the City Hall area in Cupertino the day before Easter. No Active.com registrations, you actually have to mail it in or use some decrpit city-wide course registration management system. I think I set a 5k PR at this race, but the best part – Kelly placed 3rd in her age group! And the 31-39 Women’s age group is really competitive. Really proud of her and she was lit up like a Christmas tree for the rest of the weekend. 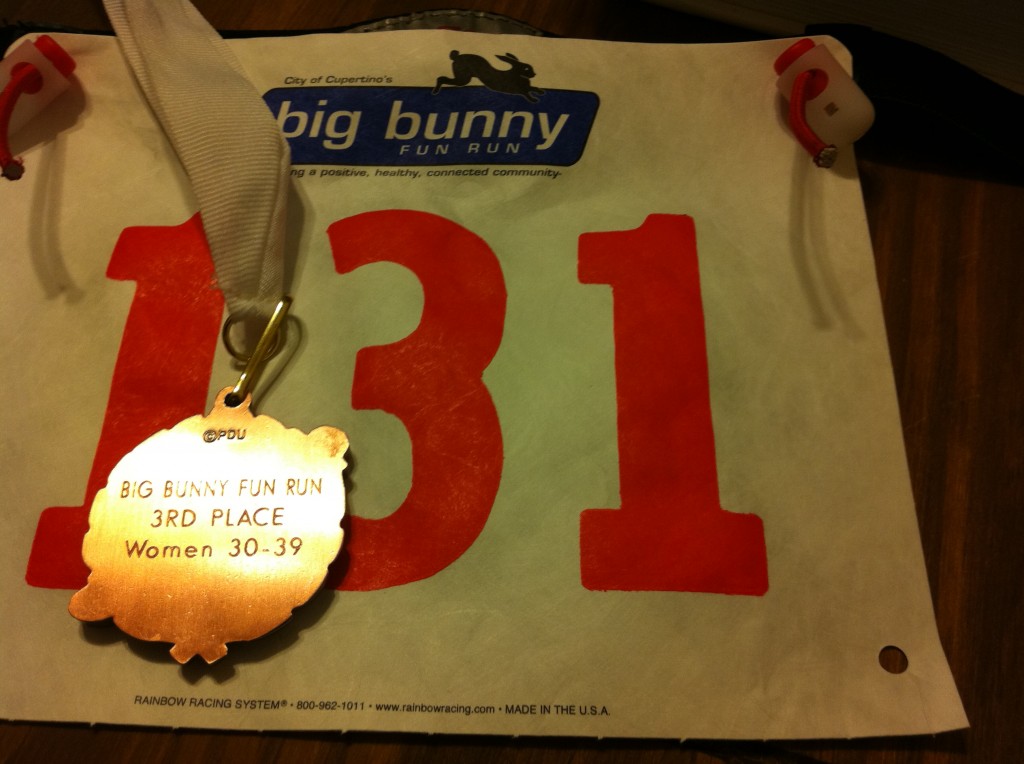 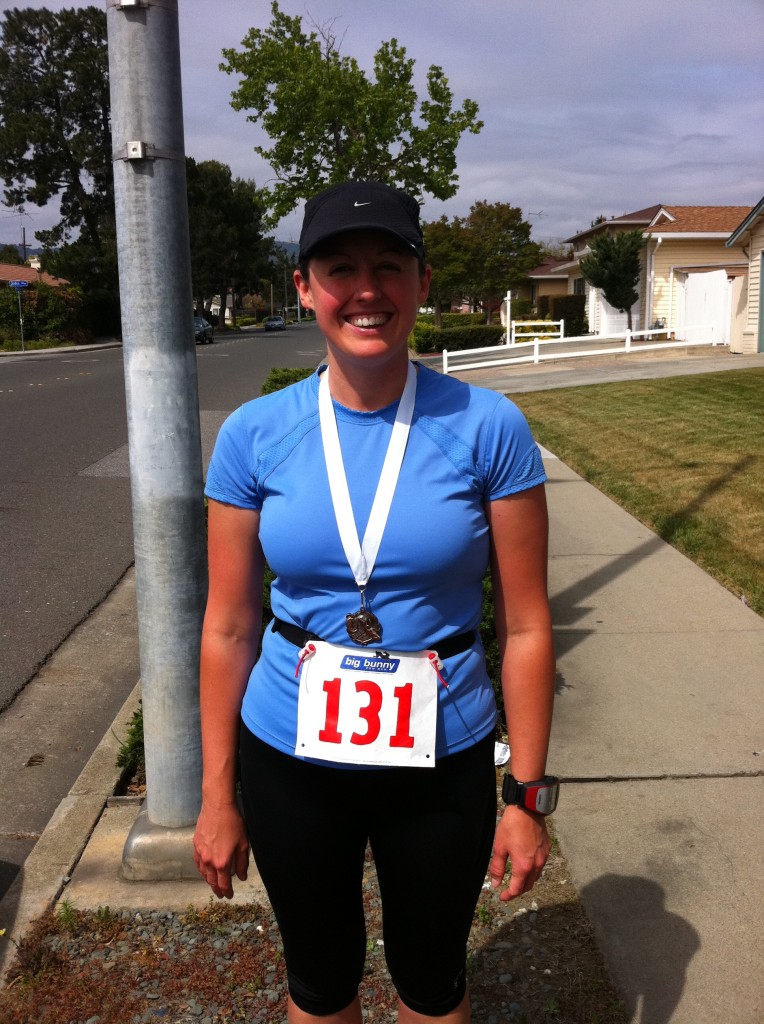 The age group placer herself!

and last but not least …

It’s a really fun and unique style of race. Each team has 12 runners and take turns running through the 194 mile course. It starts in Calistoga, CA and ends the next day at Davenport, CA next to Santa Cruz. Each team splits into two separate vans. The van with the current runner out on the road goes to a point or two on the course to support their runner and then waits at the next transition where the next waits for the ‘baton’ to get started on their leg. So if you ever see a ton of white vans and runners around, you might have wandered in the path of a relay style race. They’re becoming very popular now with the RAGNAR Relay’s taking off and even a movie being made about the Hood To Coast one. One of the nickname’s it has is “California’s Longest Party” — and that it is.

For those who have read Dean Karnazes’ book, The Ultramarathon Man, this is the same race he talks about during the book where he ran solo. Yes, the same one he ordered Round Table pizza during!

The atmosphere is pretty awesome – vans get all decked out with decorations and even some runners run in costumes. And team names? Yes, very creative: Just Watering Your Flowers Ma’am, 24 Bouncing Boobs, Team Dean Minus Dean Plus 12, Better At Running My Mouth, Pigs in Pursuit (A team of all Cops from Woodland, CA, hah!), Trans Fatty Asses, Well Hung Over… just to name a few! Our team was ‘The Scrappers’ since our fearless leader (and sponsor) works for Sims Metal Management. I don’t know how Dave can organize something as well as this. I think I’d have an easier time running it solo than trying to get everything together as smoothly as he did. Major props to him.

Leg 5:
A nice flat 5.4 mile run through Yountville, California. It’s pretty close to Napa and is a gorgeous small town. The sun was really beating down and made for a really nice challenge. If this is how bad it was here I don’t know how I’m going to make it through Ironman Texas!

Leg 17:
This was mostly on some bike paths around Corte Madera into Sausalito. It was perfect running weather although it was somewhere around 1am or something at the time. A couple big hills in the beginning but mostly pretty flat for the remainder. Felt good and my headlamp worked really well. A few runners actually thanked me for lighting up the area when I passed them. Glad I picked it up last year at Zombie Runner.

Leg 29:
This leg is a big hill. I don’t know how much elevation it actually was since apparnetly my garmin believes I fell off one of the cliffs on the route. (Says 2,542 feet gain and loss, 1607.) … probably around 1000ft I overheard someone say. Anyhow — this was very hard as some grades during the run were so steep that my calves felt strained trying to run up them even with a super quick and short cadence. Still happy with my time on that — I passed quite a number of people during it too and I was definitely not the only one struggling out there.

The only thing I really dislike about it is that some people/teams are infatuated with ‘roadkill’ — passing another runner. I dislike the whole concept. I think running is more about being free and enjoying the spirit and experience. It’s more euphoric to me than marking numbers and celebrating passing someone who may be slower than you. Big deal. Good job. I have more appreciation and respect for the person with the slowest time than I do the quickest. I like to think I’m not talking out of my ass – I passed 20 other runners and was passed by 2 runners. (3 on the first leg, 8 on the 2nd, 9 on the 3rd.) I’m not fast by most measures but I was really very lucky to get people in bunches on my route. Last year I was probably passed by about the same and I think I passed 2 people. I still remember waiting for our runner last year and watching another set of runners go by and a their van yelling ‘nice roadkill!’ to their runner that passed someone else. I don’t like that. Enjoy the time outside and the route to get there. If you’re in the top few elite teams, sure, be happy you’re smoking your competition, but I think knocking your ego down a few notches while you do it would make for a better experience. Sorry for the rant. Fortunately my team wasn’t really caught up in it at all, and were all supportive and cheering everyone else on.

My team was a really great and fun bunch: 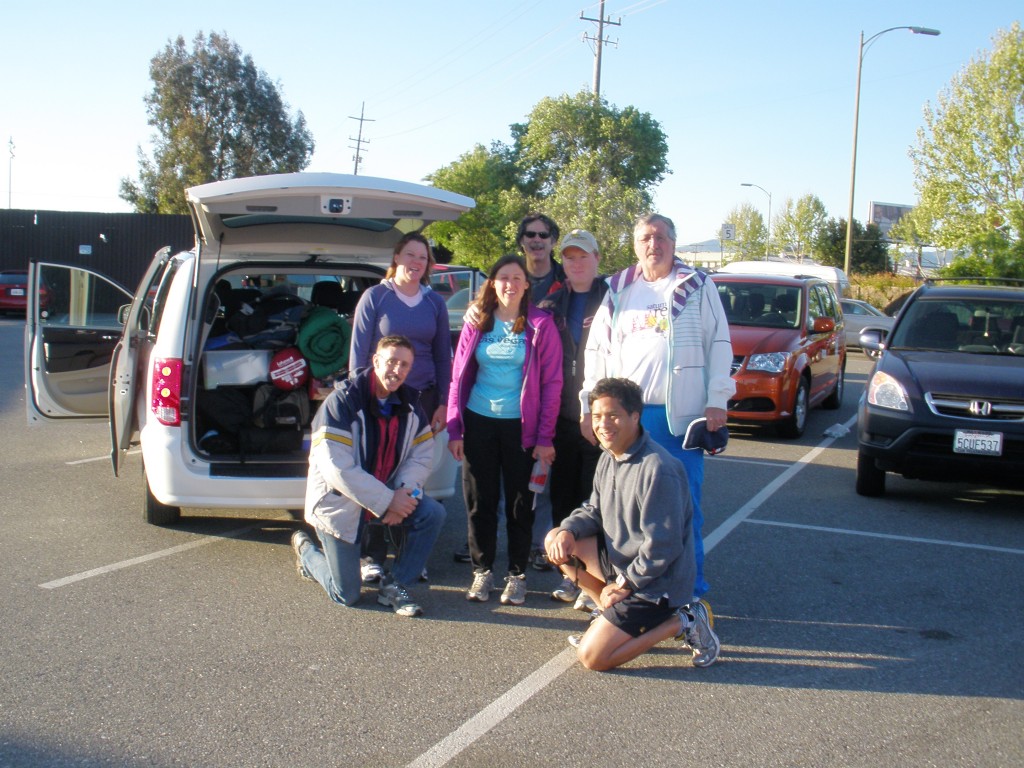 I left my cell phone and camera on the kitchen table so I didn’t even get to take any photos or utilize the twitter #TheRelay2011 hashtag. Argh!

Here’s a few photos of the weekend that I was sent from Ed and Norm (Thanks guys!) 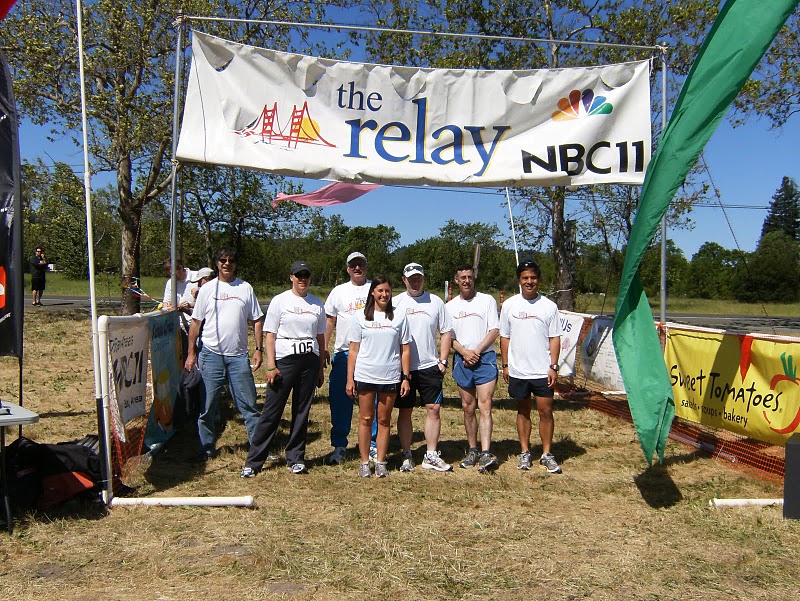 The start line. Only 194 miles by foot until the end. 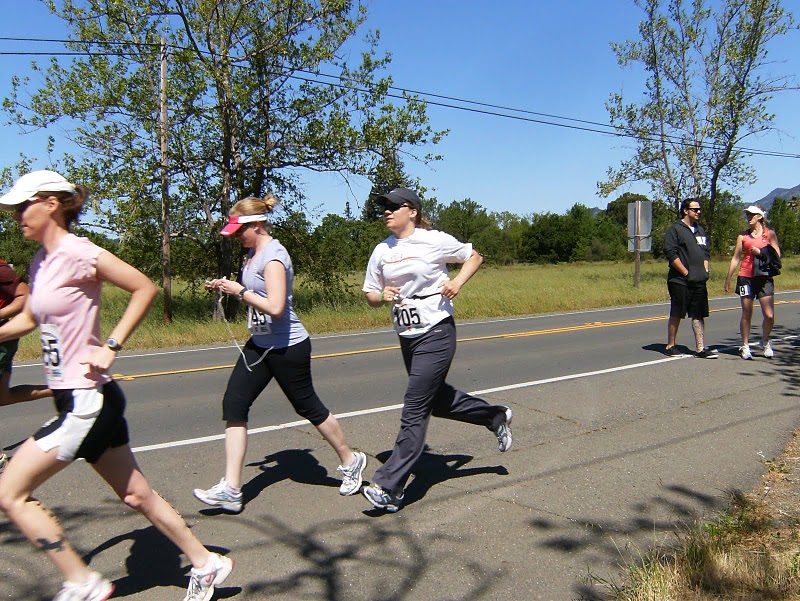 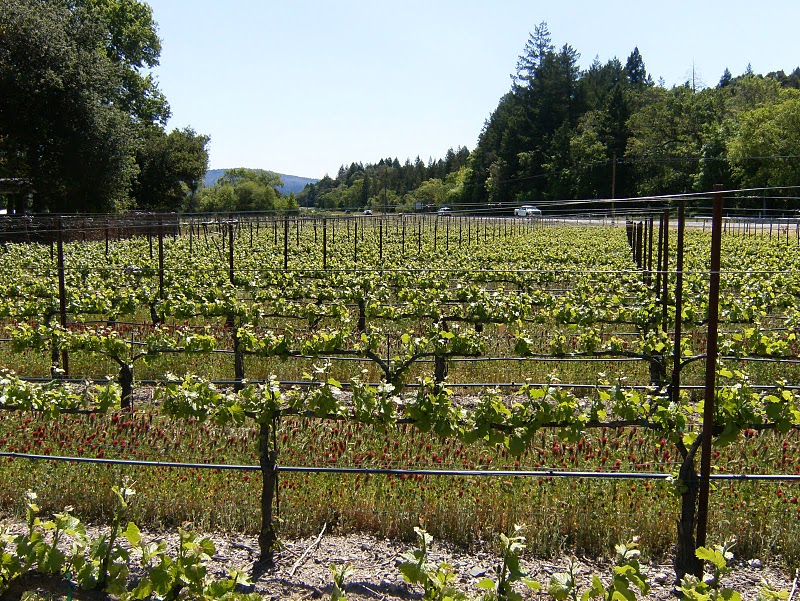 Only a brief sample of the miles upon miles of vineyards we saw. 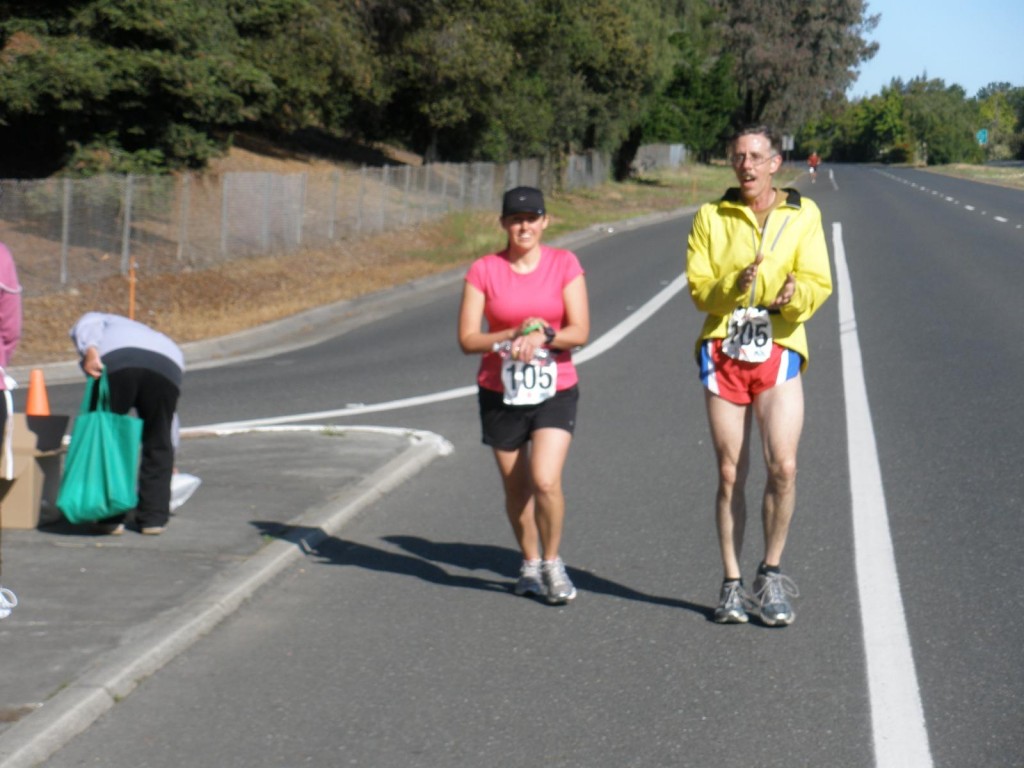 Kelly and Robert. Don't know if it's the shorts or not but he's fast! 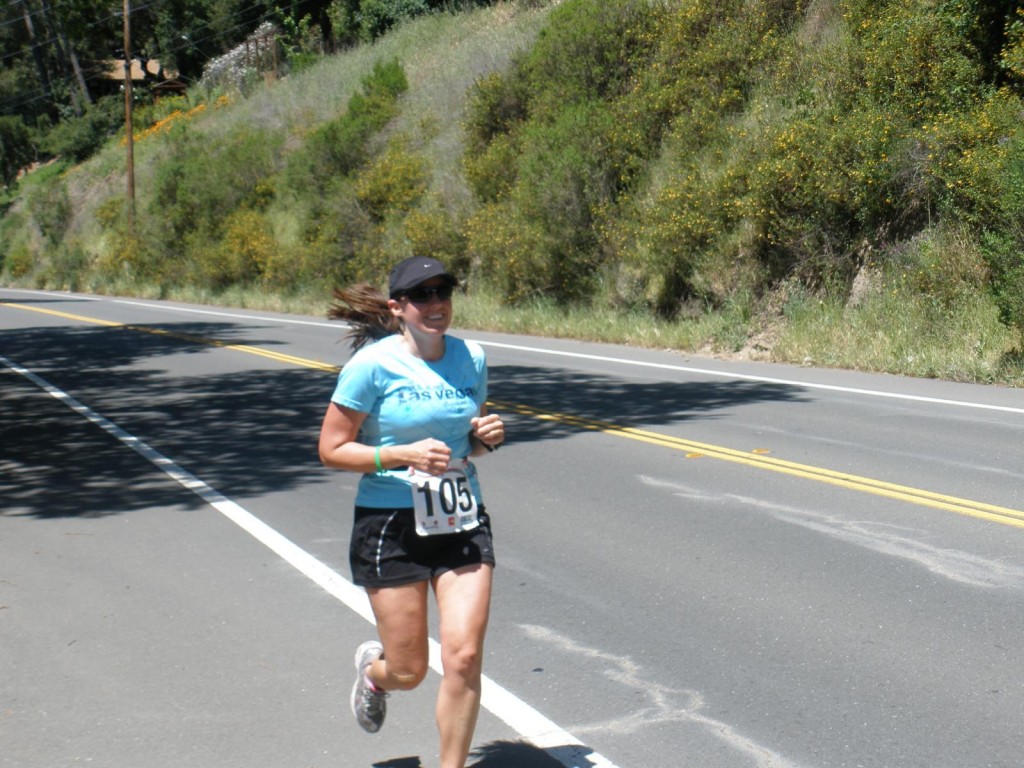 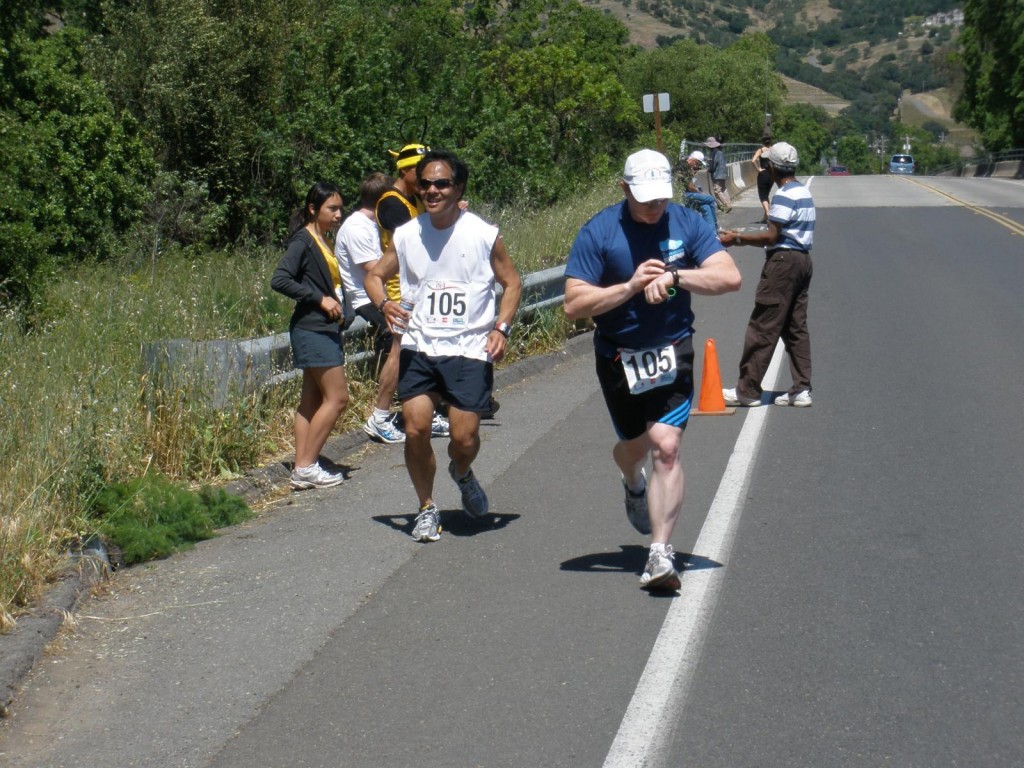 Always looking at that watch! Doh. And Norm looks too good for just running in that heat! 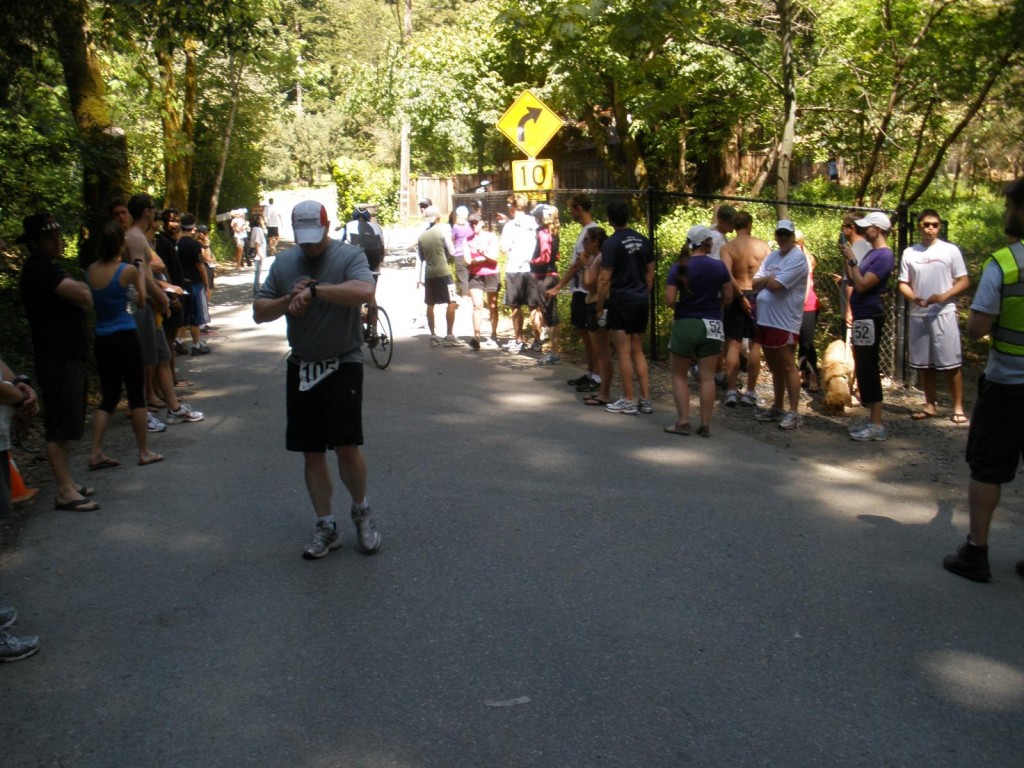 Me looking at the watch. Half of my race finish photos look like this too 🙂 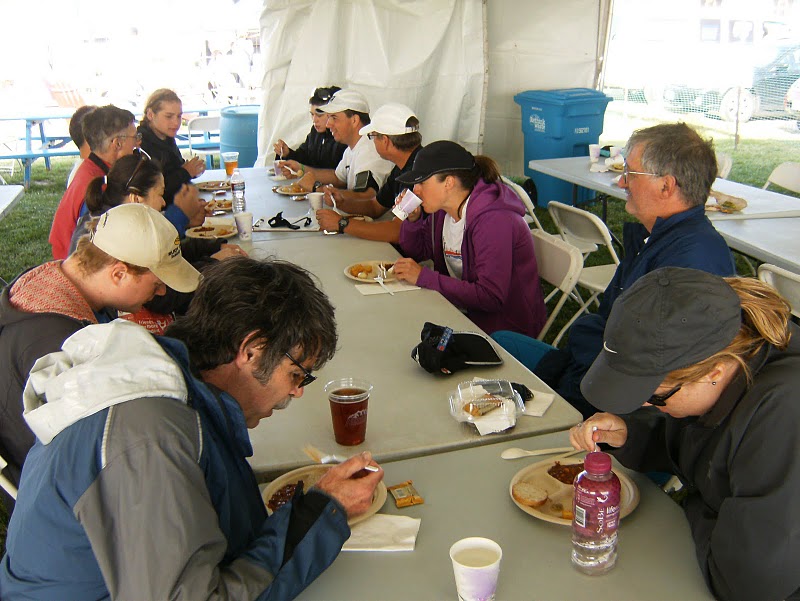 Only 196 miles, a few hours of sleep, BBQ, burritos to get to the end. And enjoying the after meal.

Whew, sorry for the photo bomb. I’m glad others took them and shared! Was a really fun weekend.

I have a very short time left to fit in some more training before I start the major taper for Ironman Texas. Do I feel ready? No way. Will I go for it anyway? You got it. I feel like I should have done at minimum twice as much volume as I did, but hope it’s enough. I’ve done a few 2.4 mile swims in my pool (without flip turns too) and come close to the two hour mark. I won’t be able to wear a wetsuit becuase of water temperature and it’s going to be hot as hell there… so I’m hoping I come in under 2 hours for that. The cutoff is 2 hours and 20 minutes and I’d like to have a bigger buffer. Cycling has been my strongpoint so I’m hoping the 112 miles will leave me with enough hours to run, walk or shuffle on the marathon.

I’ll do my best to keep this updated but feel free to follow me on Twitter. I’m sure Kelly will live tweet my updates on May 21st. Or she’ll let you know how I’m doing in the hospital that it’s sponsored by when I get bit by a water moccasin. *panic*